Join Us On the Next Prayer Bus

In January of 2018, we took prayer outside the 4 walls of our church in a unique way!  If you have ever heard of a Party Bus, we cruised the Metro Atlanta area on a Prayer Bus – and it was absolutely amazing!  It was covered by CBS46 and Fox 5 News.  For so long, the church has sat in the background, hiding within the comforts of our church buildings.  But imagine how amazing it would be if the same power we exhibit inside the church was made available through prayer in the local communities.  Before you continue reading, watch this short video recap about our Prayer Bus and you’ll see how God moved.

The Greatest Miracles Happen
When Prayer is Outside the Walls

I understand the importance of the 4 walls of the Church as good as any pastor.  My book, “Congregational Favor” has been used by small, mid-sized and megachurches alike to teach their members the importance of church attendance for many years.  However, there is also great value in taking your members outside the comfort zone of those walls.  The same power that you experience in your church every Sunday, when your congregation prays, can be made available, and will be available, as we bring many churches together on the Pray Our City Up Tour.  Take a moment and think about some of the greatest miracles we have read about in the Bible.  While there were many miracles that were indoors, many of the greatest ones happened outside the church.  In 1 Kings 18, Elisha prayed publicly and the Lord answered by fire.  In the Gospels, the healing miracles of Jesus, including the woman with the issue of blood, was a public demonstration of the power of Jesus Christ.  In the Book of Acts, Peter prayed publicly and miracles followed.  Public miracles happened through the ministry of Phillip and most of Paul’s miracles were done publicly.

I believe that when we as a Body of believers come together in prayer on this Prayer Bus Tour, God is going to use this as a vehicle to get involved in our great city and demonstrate His power.  We simply have to be willing to leave the walls of our church to make it happen.

An Organic Move of the Holy Spirit

Let me tell you how this all started.  As I was laying my head down on my pillow to go to sleep, the Lord spoke, “Prayer Bus”.  For some reason, I knew exactly what was meant by that.  I knew we needed to secure a chartered bus and ride through the city and pray.  I mentioned it to my wife and she agreed.  I mentioned it to my congregation, and the members began to sign-up.  I was so exited!  I knew God had an assignment for us.  Then, we chose our points of destination.  The first stop was Atlanta City Hall.  There, we would pray over the newly elected mayor and we could stretch our hands towards the State Capital and pray over the entire governmental and political infrastructure of the City of Atlanta and the State of Georgia.  The newly built Mercedes Benz Stadium was our second stop.  There we covered our sporting and entertainment events in prayer.  It just happened to be an American and Israel conference going on in the stadium at the time we arrived so we covered it as well.  We took a short break to go to Krispy Kreme Donuts – The Hot Sign was on.   Off we went to the Cobb County School District to cover all the schools, children, teachers and staff in Cobb County.  Our fourth stop was in the Marietta Square.  We prayed for Cobb County and Marietta Government and blessed the city and county really good.  Night had started to fall but the Square was alive with people.  People were beginning to wonder what we were doing and taking interest in our group.  Our final tour stop was at Kennestone Hospital.  From our location, we were able to stretch our hands towards the many buildings and pray for the sick patients, doctors, staff and the prosperity of the hospital.  People were looking out the windows and recording what was going on.  Hospital staff came out and recorded our prayers in progress.  The power of God was available at each tour stop.

This was an organic move of God and I want to keep it that way.  It was not about politics or publicity.  It was well organized and I did not have to make all the decisions.  That is how it should be.  It should be that every Christian Church should be able to put our denominations, titles, ambitions down and pray together so God can move in a new and exciting way among His people.   It was about prayer in a way that made my members want to get involved.  It was ORGANIC.  We want to keep this free from politics and governmental influences.  We simply want to do what Christians do best, PRAY!  We want to give God permission to be involved in our City.

This January, it was just our church members involved but it was extremely powerful.  Then it hit me…What if we had other churches get involved?  What if other Pastors, who felt the same passion to Pray Our City UP chartered a Prayer Bus and we all mapped out our tour stops and we converged with the members of our congregations to pray for our city?  God would truly be glorified in an amazing way.  What if we did it without any competitiveness? What if we did it solely for the sake of inviting God on the scene?  We have the right and the authority to do just that.  Maybe our city would see a real move of God that will make them want to be prayed for.  Maybe the non-church goers would come just to see if God is real and leave with an experience of His grace and power.  We might see the greatest harvest of souls Atlanta has ever seen.

I want you to consider joining us for our next tour.  In fact, I want you to help me plan the tour.  We might not all believe exactly the same but we can all pray together to benefit the City.  We can all talk to God.  As His children, His ear is open to all of our prayers.  We can all lay our differences aside for a moment to bless the Atlanta Metro area with the Anointing that is on our churches.  There are churches everywhere.  Every Sunday, they are filled with the same type of people, Christians.  The City needs to see a different move of God among them and you hold the key to that move.  Let’s believe together!  Let’s do something together!  Let’s Pray Our City Up together.

What’s In It For God?

The Prayer Bus is an organic move of God.  God is first and He is the only reason for this event to take place.  He gets to be outside of the walls for a moment so He can move among the people who might not ever come in the walls.  He gets to affect the governments and venues and districts of our city that might have never experienced the kind of prayer and power your church offers.  What’s in it for God?

If he chooses, He will have an opportunity to move supernaturally among us like He does in our churches.  We are making Him available to the metro area in a public way.  He might not get this opportunity otherwise.  He goes wherever we take Him.

When I heard, “Prayer Bus”, I was simply obedient to the assignment.  It felt good.  Actually, it felt GREAT!  It felt great to be a part of a move of God that did not have to involve anything more that my church members going to the city and having a good time in prayer.  It felt great to be a part of an event on the government steps for real prayer – not a moment of silence.  It felt great to be able to take our church culture to the world and pray our way – not in a dignified, politically structured event with dignitaries.  We just prayed.  We prayed loud!  We prayed hard! We prayed without worrying what passerby’s might have thought.  Spiritual growth happened among my people and it was instant.  I believe you can count on spiritual growth with yours as well when your members get around other Believers who believe in the power of prayer.  There were a few other benefits from the meeting that were not intended – they happened organically as well:

How Do I Get My Church Involved?

Simply fill-out the form below and one of our team members will reach out to you with the details of the next tour.  Also, consider forwarding this page to your pastor and ask him to pray about getting your involved.  If you are a pastor, all I need to know is that you want to be a part of it.  Once we have enough pastors who are committed to bringing a bus load of their members to the Prayer Bus Tour Stops, we can meet and plan everything out together.

Fill out the form and let us know you are interested in joining the Pray Our City Up Tour and I will reach out to you by phone to discuss the details.

A View of the Prayer Bus We Used 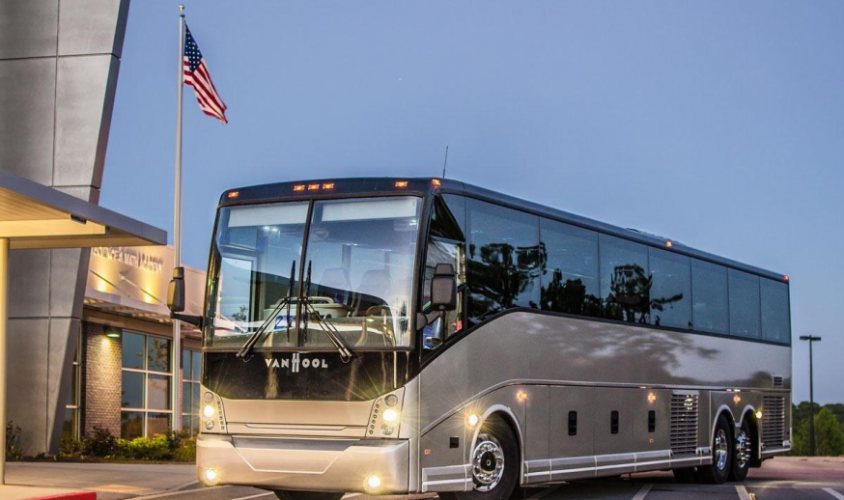 Prayer Bus provided by His Majesty Coach is an amazing way to cruise through the city while you pray over the different areas in your region. 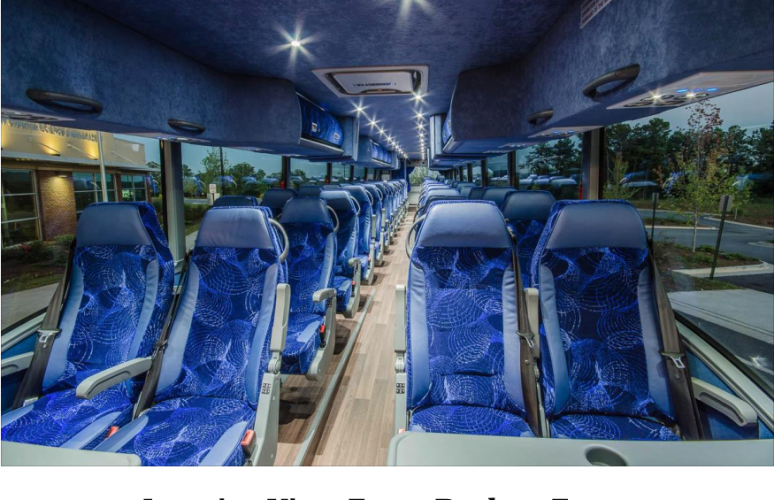 Inside the Prayer Bus is an amazing cabin that holds 56 people. Pray in the comfort of the bus as we make it to our points of destination. There will be a lot of power active on this coach. 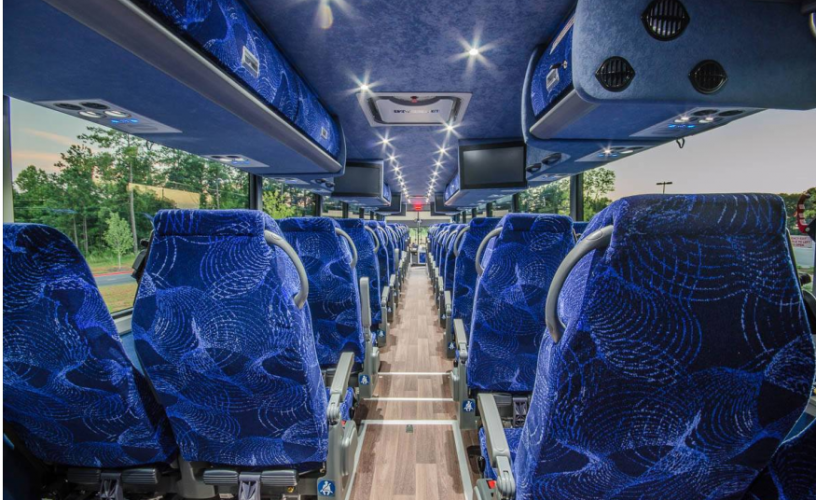 The Prayer Bus is a luxury coach that will seat some of the most powerful praying Christian believer in the city. This is an amazing way to start the new year.